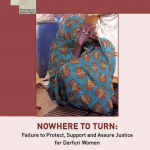 Nowhere to turn: failure to protect, support and assure justice for Darfuri women

This report amplifies the voices of some 88 women in the Farchana refugee camp, some of them breaking their silence for the first time. They spoke about the sexual violence visited upon them both in Darfur and in the environs of the refugee camps in Chad, and about their lives and difficulties in the camp. The report reveals the profound stigma and physical violence to which many women have been subjected as a result of sexual assault.